Our Facebook event is officially live! Please RSVP now! We are continuing to introduce you to the speakers of our event, Evening Conversations at the ICP for Evening I at the ICP Museum. Today we are posting about our Evening I moderator, Kelly Shindler. There will be upcoming posts about the Evening II guests; Abbas Akhavan, Caitlin Cherry, and Daniella Rose King. 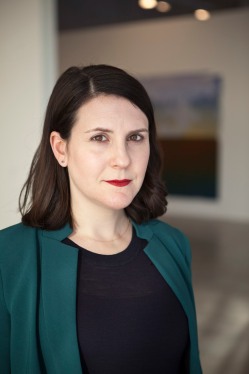 Kelly Shindler began her career as an associate curator at the St. Louis Art Museum in 2011. During her tenure, she organized over thirty exhibitions featuring artists such as Rosa Barba, Geta Brătescu, Josh Faught, Sheila Hicks, and Anthony McCall. She curated the midcareer survey, “Dear Nemesis, Nicole Eisenman” 1993–2013, which was recognized as the second best monographic museum show in the country in 2015 by the International Association of Art Critics. Prior to working at the Contemporary Art Museum St. Louis, Shindler was a producer of the PBS documentary series Art:21—Art in the 21st Century—from 2003 to 2011 and has organized numerous shows as an independent curator.

Shindler is the Senior Specialist for Exhibitions and Public Interpretation at the Pew Center for Arts & Heritage in Philadelphia. Prior to joining the Pew Center, she was Associate Curator at the Contemporary Art Museum St. Louis (CAM), where she organized solo exhibitions with Tala Madani, Arlene Shechet, Lari Pittman, Sheila Hicks, Anthony McCall, The Propeller Group, Rosa Barba, Mika Taanila, Geta Brătescu, Takeshi Murata, Kevin Jerome Everson, and Josh Faught, among many others. Previously, Shindler was an independent curator, organizing exhibitions such as Chicago-Scope: The Films of Tom Palazzolo 1967–1976 at The Art Institute of Chicago, and others for art spaces and festivals worldwide. Shindler holds dual MAs in Modern Art History, Theory, and Criticism and Arts Administration and Policy from the School of the Art Institute of Chicago.

For more information about the Conversation check out the event at icp.org!